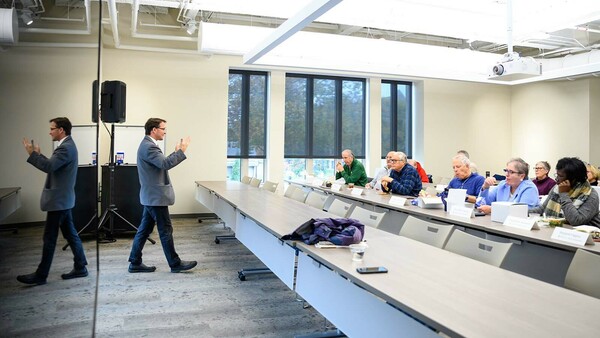 A Return to College

In 2016, Tom Schreier ’84 had just wrapped up a nearly 40-year career in the aviation and investment industries when he sat down at his desk to read a stack of magazines that he never had time for.

An ad on the back of the Harvard alumni magazine caught his attention. He said the Advanced Leadership Initiative there is aimed at “people who had been reasonably accomplished and are looking to go back to school for a year to decide what they want to do afterwards.”

Schreier was accepted into the program and a similar one at Stanford. That August, he was moving his youngest daughter into her first residence hall room at Notre Dame when he ran into his old friend Lou Nanni, the vice president for University Relations, and talked about his plans. Schreier said he was deciding where to attend, but Nanni said he had a better idea.

How about helping Notre Dame start a similar program? A few hours later, Nanni called to say that the Board chair, University president and provost all happened to be together and wanted to speak with Schreier, who was lathered in sweat from carrying furniture up the hall’s stairs.

“I wasn’t terribly presentable, and then they all walked in in their suits and ties and the journey began,” he said.

After two weeks of meetings with campus leaders, Schreier said he was “convinced that we could do something every bit the equal of what they do at Harvard and Stanford, but distinctive.” Leaders of the other programs told him Notre Dame would be able to “do some things that we can’t do as authentically as it relates to discernment and spirituality.”

Former Provost Tom Burish asked Schreier to be the program’s founding executive director. He studied the other programs and met with numerous faculty members “because you’re going to introduce kind of a foreign element into the academy.”

The Inspired Leadership Initiative (ILI) started in the 2018-19 academic year with 15 fellows and funding from Terry and Nicola Mullen. Enrollment stayed even through the following year, skipped the pandemic year and expanded to 23 this year, with a goal of 30 in the future.

Schreier said the Harvard program focuses on goals, and Stanford on the experience. Notre Dame lands in between, helping fellows “be thoughtful about your next act.”

“What we really try to focus on is helping them to have a direction and not a destination,” he said. “It’s not about what you’re going to do when you’re finished. It’s about who you’re going to be.”